To share your memory on the wall of Elder Robert Houston, sign in using one of the following options:

Provide comfort for the family of Elder Robert Houston with a meaningful gesture of sympathy.

He was a high school graduate and attended Greenville Technical College. He was retired from Upstate Fatherhood of Greenville.

Left to treasure many fond and loving memories are his wife, Porsha Miller Houston of the home; three daughters, Kadeja Houston, Shadeja Houston, both of the home, and Demetria Houston of Greenville; one son, Trayvis Jackson of Appleton, WI; one sister, LaToya Houston of Williamston; two brothers, Steven (Donna) Williams of Reidsville, NC, and Roderick Houston of Williamston; two grandchildren; three godchildren, Londyn “Peanut” Jackson, Kaia East and Joshua East, all of Greenville; three aunts, favorite aunt, Joyce Smith and Carrie (Gilbert) Ware and Annie Mae (Marvin) Johnson, all of Greenville; one uncle, Stephen Presha of Greenville; and a host of other relatives and friends.
Read Less

We encourage you to share your most beloved memories of Elder Robert here, so that the family and other loved ones can always see it. You can upload cherished photographs, or share your favorite stories, and can even comment on those shared by others.

Posted Jul 19, 2019 at 09:19am
Our deepest condolences and thoughts are with you and your family during this difficult time. - your Realpage family

Flowers were purchased for the family of Elder Robert Houston. Send Flowers

Posted Jul 17, 2019 at 07:54pm
No amount of words can express the pain that you are going through. We are sending you love and prayers and hope you are able to find strength during

Flowers were purchased for the family of Elder Robert Houston. Send Flowers

Posted Jul 17, 2019 at 09:17am
I truly hate that your family lost a loved one, but soon baby boy will be here to give joy to the sorrow. From The Jackson/Johnson Family with love

Posted Jul 16, 2019 at 01:37pm
PORSHA, LOSING YOUR HUSBAND IS NOT EASY; AND EVEN IN THE DAYS TO COME AS YOU MOURN, MAY GOD OF ALL, COMFORT YOU AND HOLD YOU AND THE CHILDREN UP. REMEMBER YOU ARE NOT ALONE, FOR WE, YOUR FRIENDS ARE HERE TO WALK THROUGH THESE DARK TIME WITH YOU. I AM VERY SORRY FOR YOUR LOSS. LOVE YOU. BETTY COBB
Comment Share
Share via:
L

Posted Jul 16, 2019 at 01:06pm
Blessed are those who mourn, for they will be comforted. With Prayers and Heartfelt Sympathy to Porsha Houston and Family during this period of bereavement. You are in our Thoughts and Prayers, from the Staff and Management of SHARE.
Comment Share
Share via: 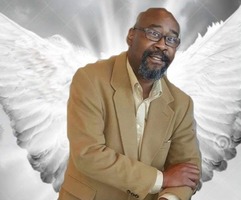