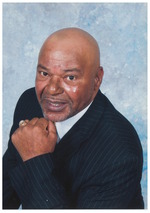 Life is like a journey taken on a train. Reverend Broadus Perry Mackey, Sr., 66, of Greenville, South Carolina, prepared to depart this life on Tuesday, July 30, 2019, as the 7:30 p.m. train to Heaven arrived at Prisma Health in Greenville. The Lord said, “All aboard, it’s time to go”. Since he knew something about traveling, his fare had been paid and he was ready for his departure, faith intact, and all was well with his soul. He said his body was getting very tired, and he knew of only one place his body would feel brand-new.
Broadus was born to the late James C. and Geneva Robinson Mackey on June 15, 1953. He married Gloria Jean Dubose some 39 years ago.

Broadus was a 1971 graduate of Berea High School. He was also a graduate of the N. J. Brockman School of Religion at the Martin Webb Learning Center. Broadus had a passion for serving Jesus Christ and spreading the Gospel message. He took God’s calling on his life seriously and was always looking for opportunities to lead others to the Lord.

Through his journey with Christ, he served as a Deacon, Sunday School Superintendent and member of the Brotherhood Auxiliary; Broadus was ordained as a minister in 2005, at Rocky Mount Missionary Baptist Church under the late Reverend Dr. J.W. Henderson. He was ordained as Reverend in 2012, at the Tree of Life Educational and Missionary Baptist under the late Reverend Louvenia Robinson.

Broadus was employed for at 35 years CSX Transportation working in various positions with the last being a Track Civil Engineer.

Upon retiring, his main job was to raise his companion, “Champ” and do as much traveling as possible. One of his greatest joys in life was spending time with his family and especially his grandchildren. Many wonderful memories were made over the years with various friends and family. He leaves behind a multitude of family and friends that were blessed by knowing him, but most importantly, blessed because he shared the Gospel of Jesus Christ.

Broadus was preceded in death by a son, Cory Mackey; a sister, Patricia Mackey; a brother, Willie James Mackey; and his grandson, Deontea Perry Mackey.

He leaves to cherish many great memories, and will be forever loved by his wife, Gloria; daughter, Charity Alise Mackey of Greenville, SC: sons, Broadus Perry Mackey, Jr., residing in Bennettsville, SC, and Eric Lamark McElrath of Greenville, SC; sisters, Lucy Ghaskin and Genevieve (James) Sitton, both of Greenville, SC, and Karen Brownlee of Charlotte, NC; a grandson, Jarious Keshawn Mackey-Burns, who was reared in the home, six other grandchildren; and a host of other relatives and friends.

All rights reserved. This obituary is also archived at obittree.com