To share your memory on the wall of Travis Anderson, sign in using one of the following options:

Provide comfort for the family of Travis Anderson with a meaningful gesture of sympathy.

Travis was educated in the Greenville County School System and attended Blue Ridge High School. A resident and good neighbor of the Taylors Community, he never met a stranger and was known to be a “Good Samaritan.” He loved his family, treated his friends as relatives, and was proud to be from the village known as “Saint Mark.” His earth-experience of 38 years came to a close on Monday, January 6, 2020 as God’s heavenly arms opened wide to receive “TRAP” and give him eternal peace and rest from the troubles of this life.

The love, life, laughter, and legacy of Travis “TRAP” Anderson will be cherished by his loving family – his parents, David and Velma Elaine Anderson of Taylors, SC; his sister, Adrian “AA” Anderson of Taylors, SC; his brothers, Neville (Natalie) Anderson of Greer, SC and Quintous Ferguson of Greenville, SC; special sister and brother,Antonio Flemmings and Melody Gilbo, both of Greenville, SC; grand-parents, Frances Robinson and Elizabeth Sims of Wellford, SC; a special aunt, Glenna Holcombe of Wellford, SC; a niece, Genesis Anderson of Taylors, S.C; nephews, Isaiah Smith, Zion Anderson,Elijah Holcombe, and Xavion Holcombe; a cousin, Kim Holcombe; and a host of other aunts, uncles, cousins, neighbors, and friends.
He was preceded in death by his grandparents; Willie Anderson, Emma Anderson, and Preston Robinson.
Read Less

We encourage you to share your most beloved memories of Travis here, so that the family and other loved ones can always see it. You can upload cherished photographs, or share your favorite stories, and can even comment on those shared by others.

Posted Jan 11, 2020 at 04:45pm
Travis was the sweetest person - always so respectful to me and my family. I tutored him when he was a young boy, brilliant mind! He'll forever be in our hearts. My prayers are with his parents, siblings, family and friends. May God continue to comfort and strengthen you.

Posted Jan 11, 2020 at 01:51pm
David and Elaine,
Prayers goes out to your family during this time of hurting. Know that only God can carry you through this pain. Turn it over to him, allow his grace and mercy to carry you.His hands to hold and keep you. And his mighty Love to surround you.
Love, Cynthia Drummond
Comment Share
Share via:
HS

Flowers were purchased for the family of Travis Anderson. Send Flowers

Posted Jan 09, 2020 at 12:09pm
Travis had the biggest heart of anyone I have ever known! I wish we had more time before The Lord called him home. He was always so sweet so I called him Sweet T. He called me Jaws bc of my big cheeks. He loved to make me smile and laugh and he would say “give me one of them jaws” and would kiss me on the cheek. I will miss him everyday. My days won’t be the same without him. We would ride around everyday and listen to music and dance and play like we were kids again. My best memories are with him.
Comment Share
Share via: 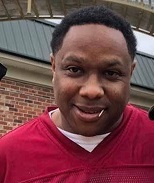