To share your memory on the wall of Mother Frances B. Josey, sign in using one of the following options:

Provide comfort for the family of Mother Frances B. Josey with a meaningful gesture of sympathy.

Print
.To every thing there is a season, and a time to every purpose under the heaven.

A Time to be Born: Sarah Frances Toot Brownlee was born on June 19, 1926, in the Simpsonville/Fountain Inn area of South Carolina. She was the only daughte... Read More
.To every thing there is a season, and a time to every purpose under the heaven.

A Time to be Born: Sarah Frances Toot Brownlee was born on June 19, 1926, in the Simpsonville/Fountain Inn area of South Carolina. She was the only daughter of the late Will and Ethel Ophelia Henry Brownlee.

A Time to Love: She met her only true love, Hilliard Josey and they were united in holy matrimony on August 3, 1954. She was blessed to be the mother of six birthed children, Dorothy, James, Willie, Beatrice, Richard, and Barbara, and she gained a son, Vernon Webb. She was also the mother of many whom she loved and nurtured in so many ways.

A Time to Serve: She was employed by the James Hamilton Stewart Family for over twenty years. There she inherited a second family, they were raised as if they were her children. She loved the late Jimmy, the late Johnny, and surviving Jerry and Marilyn. Her work experience continued during the course of years by being employed by Dan River/Woodside Mill, the McDonalds, Inc. and the Law Firm of Ogletree, Deakins, Nash, Smoak & Stewart.

At a young age, she was baptized in a branch (In her words meaning stream) at the Rocky Creek Baptist Church, where she served as a member of the Usher Board. She later joined the Queen Street Baptist Church in Greenville, close to where she lived, due to Rocky Creek only having service on two Sundays a month. There she was known as the Mother of the Young Adult Choir. She was the oldest member of the church and her love for others was exemplified daily. She loved the Lord with all her heart, mind, body and soul.

She was an honorary member of the International Masons and Order of the Eastern Star, Star of Bethlehem #2, Chapter #92 where she served faithfully for many years as the Worthy Matron.

A Time to Enjoy Life: “Mama Josey” as she was affectionately called, was faithful in providing the obituaries from funerals so she could provide them to the people of the Sterling Senior Action Center. They would read them and the Community Informer Newspaper. She looked forward and loved to go to what we called, school everyday. She has travelled extensively to different countries on cruises in her latter years. We wanted her to enjoy life to the fullest and we know she did. She used so many funny sayings in her conversations, such as: Drive on your side of the road; Speak mouth; They done shut my mouth; I can’t say nothing; Eat what you see and that you don’t, don’t ask for it; Shut your mouth wide open; Referring to ministers, stop saying you know the story, everybody don’t know; Um done told you; and when asked, How are you doing? her response was, Tolerable Well.

Favour is deceitful, and beauty is vain: but a woman that feareth the Lord, she shall be praised.

A Time to Die: She received her grant of approval to come to her Heavenly home on Wednesday, February 5, 2020, at 1:55pm and she peacefully accepted the call. Her work down here was done. She was preceded in death by her parents; her husband; and her only brother, Arthur “Duke” Brownlee.

We encourage you to share your most beloved memories of Mother Frances B. here, so that the family and other loved ones can always see it. You can upload cherished photographs, or share your favorite stories, and can even comment on those shared by others.

Posted Feb 06, 2020 at 12:25pm
To the Josey Family,
Sometimes the pain of separation from those we care about can be difficult. I'm reminded of the words written in 1 Thessalonians 4:13-14 NIV 13 Brothers and sisters, we do not want you to be uninformed about those who sleep in death, so that you do not grieve like the rest of mankind, who have no hope. 14 For we believe that Jesus died and rose again, and so we believe that God will bring with Jesus those who have fallen asleep in him.
Mrs. Josey will be missed greatly, but just remember At death, God's people don't say "goodbye," but "we'll see you later."
Furman S. Jackson & Rachel Jackson-Washington
Comment Share
Share via:

Posted Feb 06, 2020 at 02:11am
I so sorry for your horrific loss..Mama indeed was an awesome lady...it was a joy to see her BEAUTIFUL face..prayers for each of you...SHALOM
Comment Share
Share via:
A

Posted Feb 05, 2020 at 06:11pm
To: Beatrice, Barbar Ann & the Josey family I'm so sorry to her the loss of your beloved mom Mrs. Josey to be absent from this body is to be present with God the father & his bless son Jesus Christ whom is Our Lord & Blessit Savor yez you'll will see & meet her in the Rapture some sweet day & in that sweet 👋 bye-n-bye Lord when the morning comes all of God saint's of God togethering home she will tell her story of how she had overcomes and we understand it better bye-n-bye so Mrs.Josey sleep on in the heaven with God and Our blessit Savor Jesus Christ & the heavenly 👼 Angeles & you'll the family have my Sincere Deepest Sympathy & my prayers are with youll.From: Annette Lee & The Lee Family👼🙏🙏.
Comment Share
Share via: 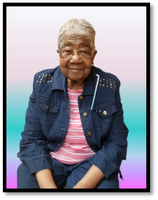