To share your memory on the wall of Deacon Willie Ladson, sign in using one of the following options:

He joined Mt. Pleasant Baptist Church at an early age where he was a faithful member until his health declined. He served as chairman of the Deacon Board, served as a Trustee, sang in the Senior and Mass Choirs, and was a Bus Driver and Custodian.

He was preceded in death by a son, Matthew Ladson; three sisters, Pauline Graffried, Thelma Cason and Carrie Lou Morgan; and one brother, William Charles Ladson.

We encourage you to share your most beloved memories of Deacon Willie here, so that the family and other loved ones can always see it. You can upload cherished photographs, or share your favorite stories, and can even comment on those shared by others.

Posted Feb 19, 2020 at 07:16pm
I love you papa i will Miss you. And long talk on the phone. Rest in piece. You will never forgoten love Your granddaugher.
Comment Share
Share via: 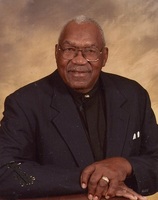