To share your memory on the wall of Rev. Dr. Ronald Barton, sign in using one of the following options:

Provide comfort for the family by sending flowers or planting a tree in memory of Rev. Dr. Ronald Barton

He was educated in the Greenville County School District, after graduati... Read More
Rev. Dr. Ronald D. Barton was a native of Greenville, South Carolina. He was the seventh child born to the late Mr. Willis F. Jr., and Mrs. Mary Louise Barton.

Dr. Barton was licensed into the Gospel ministry when he was 15 years old by the Shady Oak Baptist Church of Greenville. He was ordained by the Mount Hebron Progressive Baptist Association of Columbia, South Carolina. His pastoral experience includes being pastor of Central Baptist of Columbia, SC where he served for seven (7) years; Shady Oak Baptist Church, (his home church) where he served for over 20 years; and planted a Ministry, Restoration Community Outreach. Dr. Barton was currently a member of Long Branch Baptist Church, where his son in ministry, Rev. Sean Dogan is pastor.

Dr. Barton has preached extensively all over South Carolina and other states as well. He has also preached on international soil, having preached in Nassau Bahamas.

He was a member of the Reedy River Baptist Association, the Reedy River Congress of Christian Education (where he served as Dean), the Baptist Educational and Missionary Convention of South Carolina, the Progressive National Baptist Convention, Inc. (where he was a former state chairman and member of the Board of Evangelism), the Baptist Ministers’ Fellowship of Greenville and Vicinity and the Kingdom Association of Covenant Pastors.

Dr. Barton was an anointed musician and a gifted vocalist and songwriter. He was director of the Impact Youth Choir and a charter member of the Harold Brooker Workshop Ensemble and the Male Chorus, Inc., both of Columbia, South Carolina. He had the opportunity to play and sing with such Gospel greats as Rev. James Cleveland, Rev. Daryl Coley, Richard Smallwood, John P. Kee, Sensational Southern Echoes and many others. He was also a radio announcer for WPJM Radio in Greer, South Carolina, for many years.

He was involved in the civic arena as well. He served on the Board of Directors for the Family Self-Sufficiency Task Force of the Greenville Housing Authority, the Board of Directors for S.H.A.R.E, the Urban League of the Upstate, Senior Action, Morris College, and the Citizens Advisory Council for the Greenville County Commission on Alcohol and Drug Abuse. He was a member of the N.A.A.C.P., the Morris College National Alumni Association, and the Alpha Phi Alpha Fraternity, Inc.

He was preceded in death by his parents and siblings, Gloria Foggie, Margaret Peterson, Danny Barton, and Willis Barton, III.

Dr. Ronald D. Barton leaves to cherish his memory and celebrate his legacy, his former wife and dear friend, Patricia Barton of Greenville, SC; one daughter, Ericka Kennedy of Lexington, KY; one granddaughter, Anjelica Jones of Lexington, KY; his spiritual son and daughter, Pastor Sean and Satreva Dogan, and spiritual granddaughter, Ramiah Dogan, all of Simpsonville, SC.; an uncle, Jack Rosemond; a sister-in-law, Rodessa Barton; numerous god-children; and a host of other nieces, nephews, other relatives and friends.
Read Less

The insignias listed here may be subject to copyright and / or trademarked. Those copyrights and trademarks are owned by the respective organizations.

We encourage you to share your most beloved memories of Rev. Dr. Ronald here, so that the family and other loved ones can always see it. You can upload cherished photographs, or share your favorite stories, and can even comment on those shared by others.

Urban League of the Upstate sent flowers to the family of Rev. Dr. Ronald Dexter Barton.
Show you care by sending flowers

Posted Feb 24, 2020 at 08:25am
We wrap your family in love hugs and support during this time. Dr. Barton was a classmate and friend of mine. I along with my church family, Community of Grace Church, Bennettsville, SC want you to know that the family is in our thoughts and prayers. We pray for strength and continued peace for the family. Pastor Eddie L. Davis
Comment Share
Share via:
KF

Posted Feb 22, 2020 at 07:40am
My heart is sadden at the passing of my dear friend and brother. A wonderful servant of the Lord. My prayers to the family and those in the community where he lived. Dr. K. Gerone Free
Comment Share
Share via:
FW

Posted Feb 21, 2020 at 10:21pm
My condolences to the family. I worked at WPJM 800am Radio Station along with Rev. Barton we came on different days. He was a joy to be around, and also worked with him at Spirit Fest with ERay promotions, he all ways had a smile. I did know him when he lived in Columbia and was the Pastor of Central Baptist Church. He would hold a conversation with me when ever we ran into each other he will truly be missed.

​To the Barton Family

After the tears have dried and the good byes have been said, all we have to hold on to are the happy memories that we shared with our loved ones who have passed, this is what keeps theirs alive in our hearts and in our minds, and they will continue to live on, through us.
Although no words can really help to ease the loss you bear, just know that you are very close to us in every thought and prayer.
The Greater Galilee church Family of Charlotte and Winston Salem are praying for you to get through this time with the peace that comes from the knowledge that God loves you and that He will take care of you our sincere thoughts and prayers are with you.

Posted Feb 21, 2020 at 04:49pm
God bless his memory! And I thank God for the pristine privilege of friendship,fellowship,and ministry with Pastor Barton. I shall always remember his kindness to me in the beginning of my ministry. He was a Blessing! 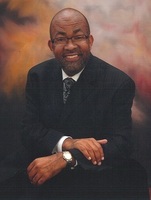