To share your memory on the wall of Rev. Mack Hawkins, sign in using one of the following options:

Provide comfort for the family by sending flowers or planting a tree in memory of Rev. Mack Hawkins

Rev. Hawkins attended Morris College, studying Theology, and began preaching the word of God at an early age.  He was known to be a Bible Scholar.  He pastored several churches and was an associate pastor of Pilgrim Rest Baptist Church. He retired from Pet Dairy in 2012.

He was married in May 1963, to Frances Owens Hawkins.

He was preceded in death by his parents; two daughters, Cynthia Hawkins and Lisa Mosley; and a sister, Hazel Hawkins.

We encourage you to share your most beloved memories of Rev. Mack here, so that the family and other loved ones can always see it. You can upload cherished photographs, or share your favorite stories, and can even comment on those shared by others.

Posted Mar 26, 2020 at 04:44pm
We are praying for the Hawkins Family during this time of loss. May God continue to bless you all.
The Barksdale Family
Comment Share
Share via:
OW

Posted Mar 24, 2020 at 01:12pm
Hello to the Hawkins Family,
I pray that you can find peace during your time of grievance. May God bless and draw your family closer together while you push through this very difficult time. I am friends with Mark and daughters, Loraine and Delores. I met this family when we moved from SC to Dobbs Street, what a wonderful family to know. 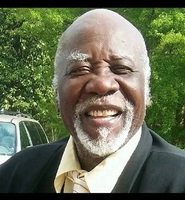